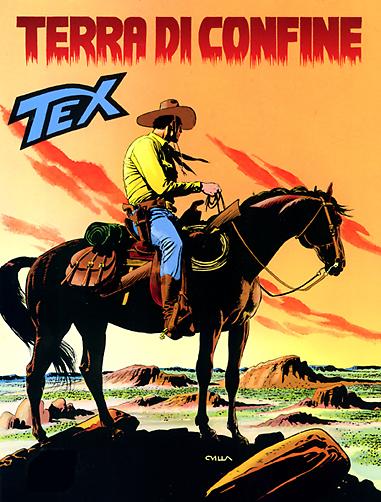 Having destroyed the Behan clan and the gang interested in the Nameless Town gold concessions, the rangers and the banker, Grayson, settle accounts with the unfaithful Barbara and her lover, Steve Behan, the true brains of the gang. A while later, a group of Yaqui Indians under the orders of “Diablo Rojo” Narvaez makes a brief visit to the Navajos: they appear to leave peacefully but during the night some of them who have remained hidden steal the horses and kidnap the women of the Yavapais who are guests of the reservation, among whom Luna, Sergeant Torrence’s widow. Tex, Novak and Pat Mac Ryan throw themselves immediately into pursuit.

In this issue: the preceding adventure extends from page 5 to page 46 (artwork by Ticci); from page 47 to page 114, “Terra di confine” (artwork by Marcello).